A special lunch was held on Sunday, June 19 to thank Terry Macham for his many contributions to the life of Kimberley United Church from 1996 to 2016. Terry and Agnes are moving away from Kimberley in August. 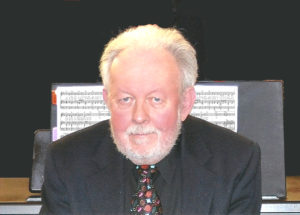 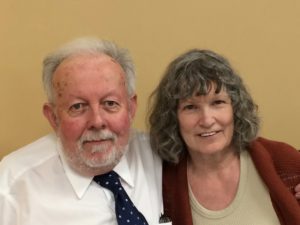 Here are some pictures from the time that Terry spent with KUC.

Terry Macham – A Reminiscence Of My Time At Kimberley United Church

In 1995, after 30 years service as an electronic technician with the Ministry of Transport – Air Administration (now Nav-Canada), I opted for early retirement as that Federal Agency was about to be “privatized.”  A year later, I and my family moved from Langley to Kimberley, largely for my then 14 year old son to be closer to skiing and also to be closer to Agnes’ brothers in Calgary.  I knew the area quite well since I had worked here for a short time in 1965. Actually, Kimberley was my first posting with the Ministry.

I grew up in Chemainus, a small sawmill town on Vancouver Island where I studied piano from the age of 7 until leaving home at 18.  My first six years of piano lessons were taught by an elderly and somewhat stern English lady by the name of Mrs. King using the Royal Conservatory of Music method.  As a young teen, tiring of that rigid classical repertoire (and Mrs. King), I changed music teachers to a rather avant-garde lady named Ruth Murrel, an extremely talented pianist who for many years was a professional musician in Vancouver, playing piano with the Mart Kenney Orchestra at the Vancouver Hotel.  I say avant-garde because for one thing she kept a large parrot in a cage next to her piano and often wore a bandana reminding me of some villainous companion of “Long John Silver.”  The parrot would sometimes screech loudly as I played which could be quite disconcerting.  I always suspected that creature could detect when wrong notes were being played.

Ruth was a hippy before that word was invented. She also insisted that I call her “Ruth,” a rather shocking intimacy unheard of in the mid-1950s.

In my five years of study with Ruth Murrel, among other things, I learned how to play from a “lead sheet,” improvising my own accompaniment from a simple melody line and chord symbols. It is largely because of this skill that I rarely play music as written, which at times can be both a blessing and a curse. Also with Ruth, I learned ragtime, jazz, boogie-woogie, and even, horrors, some rock and roll for I desperately wanted to play like “the killer,” Jerry Lee Lewis (and I still want to).  It is largely because of this experience that I tend to play hymns considerably faster than your traditional church accompanist.

As a teenager, I took up the Alto Saxophone and soon had formed a band with a few of my friends.  We did not make much money but we did meet a lot of girls.  My rock ‘n roll career did not last long  and the band broke up when one of our founding members was diagnosed with a serious illness.

My musical retirement was short lived when I was recruited to play alto sax in an “old time” dance band which played at dances every 2nd Friday at a local hall for which I was paid the then princely sum of $20 a night. However as a 16 year-old, when Elvis was at his prime, I was both dismayed and embarrassed to find myself having to play waltzes, polkas, schottisches and other “old people” dance music. Nevertheless it was a good lesson for me to understand that if you are being paid as a musician then you play what the person with the money wants to hear not the music that you like. “He who pays the piper calls the tune” as that old idiom goes.

Most nights I would sit in for the pianist while she took a few turns on the dance floor which provided both of us some relief. Blowing a saxophone for over 2 hours straight is darn hard work as is pounding on a piano for that matter.

I seldom play that kind of material now, however on the rare occasion that I do, I find it strangely nostalgic.  For example, playing for funerals rarely bothers me but a few years ago, I was asked to play “The Blue Skirt Waltz” at a memorial service and was almost overcome with emotion.  Music can indeed be a moving, spiritual experience even for a hardened old rocker.

As a teenager, I also learned to play the harmonica and when my uncle gave me a guitar, I quickly learned to play it as well. And, after leaving home at the age of 18, for many years the guitar was the only instrument I played on a regular basis.

Eventually settling down in Vancouver, I purchased a small electronic organ and returned to playing keyboard music. Some years later I also acquired a used piano and picked up where I had left off with that instrument 15 years previously.

In the early 1980’s I started playing piano at Langley United Church, volunteering in the Sunday School, accompanying their Junior Choir and substituting for the regular organist from time-to-time.

Shortly after moving to Kimberley (actually only two weeks), I once again found myself behind a Church organ while Kimberley United’s organist, Mary Vohradsky recovered from a broken wrist.  When Mary’s wrist had healed, she resumed playing and I retreated to the tenor section of the choir.  I would sometimes substitute for Mary and after a couple of years, we ended up effectively sharing the position.  And approximately ten years ago, when Mary’s failing eyesight forced her to give up playing the piano in public, I took over as the full-time organist/accompanist at Kimberley United Church.

Over the years I had made the occasional futile attempt at song-writing but it was only when I became music director for Kimberley Summer Theatre that I began composing songs that I considered good enough to be performed in public. And so,  I began writing the music and lyrics for a half dozen early summer theatre musical productions.  When I gave up that position, I switched from composing show tunes to songs more suited to worship and since that time have written three cantatas consisting of over 30 individual songs.  Additional compositions include two Palm Sunday anthems, a holy communion setting, an advent candle lighting song and a number of other chorale works as well as writing out arrangements of hymns for use as choir anthems.  I have had one song published in the United Church worship resource magazine, Gathering and have sold a few complete cantatas to other churches.

And so, as I prepare to leave the position of Music Director at Kimberley United Church, I am very thankful for having had the opportunity to have served this congregation as organist and music director for many years. And I must insist that any success I may have had as a musician and composer/arranger is not the result of any extraordinary ability on my part. Instead, I have many people to thank for their ongoing support and encouragement including those previously mentioned (even poor old Mrs. King) as well as the five ministers I have worked with at Kimberley United Church and of course the choir. And lastly but certainly not least, I owe much to the choir directors past and present, Joyce Jacobsen and Laurel Ralston.  I have learned more from them than they will ever know.  And finally, I cannot finish without mentioning my predecessor, Mary Vohradsky.  We shared many things, Mary and I, most of which went unsaid not the least of which was our “Dance Band” experience. I always admired Mary’s accompaniment skills for she could do things at the piano that are far beyond any modest ability that I might possess.

I do not know what the future holds for me – as does anyone of us – however I do know that I will always look back on my time here at Kimberley United with considerable fondness and gratitude.