To begin this time of reflection on the scriptures, I want to show you something. I have with me this morning three notebooks. 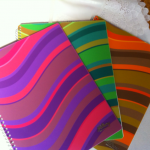 (Hold up each notebook one at a time and ask people to describe what they see – the design, the colours…) Each of these notebooks in its essence is the same. 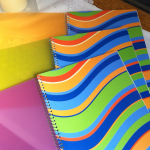 (Lift the top clear but coloured cover off each notebook to reveal the inner cover is exactly the same on each notebook) What makes each book seem different is the lens through which they are viewed which causes one to see the essence of each book slightly differently.

I’ve often thought that the same thing happens when people view the stories and theology in the Bible. Throughout the ages people have brought their beliefs, biases and perspectives – the lens through which they understand the world – with them when viewing and interpretin

g the stories of faith in the Bible. What is written in the Bible remains the same – albeit with differences in translation – but the ways in which this information is interpre
Today, on this Trinity Sunday, I’m not going to go into detail about the scholarly debates about the doctrine of the Trinity throughout the ages so you can relax. (I did try to go into a fairly detailed explanation of the theology behind the doctrine of the Trinity in my first year in paid accountable ministry but I learned that wasn’t such a good idea. It was the glassy-eyed but polite expressions on the faces of the listeners that gave me the clue that this was way too much information to digest in a short time.) As way of background information I’ll simply tell you that the theological concept of God as triune – Father, Son and Holy Spirit or God the Creator, Christ the Redeemer, and the Holy Spirit the Enlivener of faith, was extrapolated from Paul’s teachings. Paul himself does not speak of the trinity. In fact nowhere in the Bible will you see the word trinity. The doctrine of the Trinity was developed by early Christian theologians in an attempt to begin to understand the nature of God based on their understanding of some of the writings of the Early Christian Church. ted and acted upon has varied greatly over the centuries and in a variety of historical and cultural contexts.

Many of the passages used to support the formulation of Trinitarian doctrine originates from epistles (letters) attributed to the apostle Paul. A good example of this is the benediction that Paul uses as an ending for his second letter to the early Christian Church in Corinth. These words will most likely be familiar to you:

“The grace of the Lord Jesus Christ, the love of God, and the communion of the Holy Spirit be with all of you.” (2 Corinthians 13:13)

It was not until the 2nd Century C.E. that a church leader named, Tertullian, invented the Latin word, “trinitas” to describe the threefold nature of God that reflected the emerging belief that God’s nature could be understood as multiplicity within unity. The concept of the Trinity was officially accepted as doctrine at the Council of Nicea in 325 C.E. It was during this Council that differences of interpretations became pronounced and caused a split between the Eastern Orthodox Church and the Western Church.

Despite the variety of interpretations that became very complex and difficult to understand, and the strongly held opinions that created rifts in the second century church, I believe the intent of early theologians was to develop a greater understanding of the mystery of God and God’s relationship with humanity. God is immanent and recognizable as seen in the life and ministry of Jesus (and other people of faith). God is, at the same time, transcendent mystery that is impossible to fully understand and articulate in human concept and language.

We do not speak often in the United Church about the Trinity (and at this point you may be thinking that you are grateful for that) but I encourage you to listen carefully to the words in the hymns we sing, the words we use during baptisms, benedictions, scripture stories and stories of faith, all of which include references to God, Christ and Holy Spirit. In fact, our beloved United Church Creed begins with the words, “We are not alone, we live in God’s world. We believe in God: who has created and is creating, who has come in Jesus, the Word made flesh, to reconcile and make new, who works in us and others by the Spirit.” (A New Creed, The United Church of Canada, 1968, revised in 1980 and 1995)

Which brings me to the Epistle reading from Paul’s letter to the early Christian Church in Rome that Diana read for us today. (Romans 5:1-5) This short passage, which is a mere five verses, is packed full of statements of faith and encouragement. Essential to Paul’s encouragement for Christians to have faith and hope is the reminder of the active presence of God, Christ and the Holy Spirit.

The letter to the Romans was written toward the end of Paul’s life and ministry and contains what many would say is the culmination of Paul’s life’s work. The fact that it was placed as the first in the collection of epistles, although it was not the first written, seems to confirm the importance of this letter to the Early Christian Church.

Romans 5:1-5 speaks of the importance of faith, that believers have peace with God and through Jesus Christ are blessed with God’s grace and are full of a persistent hope that is inspired by God’s love poured into their hearts through the Holy Spirit which is a gift and blessing that carries them through the trials and tribulations of life.

Throughout his writings, Paul is consistent in his perspective that Jesus Christ is the lens (the conduit if you will) through which believers can fully understand and be in right relationship with God. Paul’s main emphasis and access to understanding God’s love, and the action of God’s Spirit within human nature, is from his knowledge of the life and ministry of Jesus Christ.

Paul was zealous in his Christian ideals and in his encouragement of other followers of Christ. He endured hardship in his travels and in his ministry. He was imprisoned on numerous occasions and was tireless in his efforts to spread the lessons of Christ’s ministry in the way he understood and interpreted them.

grace and blessing. I believe that Paul was speaking from his own experience and that he had learned that being true to one’s beliefs in word and action can produce hardship and that life inherently contains pain as well as joy. Paul also learned through experience that with the strength of his faith in Christ, and God’s constant love known to him through the Holy Spirit, that he could endure suffering and hardship and that his character was strengthened and his hope confirmed in the process. And, being the zealous teacher and mentor that he was, Paul wanted to share what he had learned with others.

Paul also would have witnessed the struggles of early Christian communities of faith. Many of Paul’s letters to the various churches reveal some of the challenges these communities faced. Paul’s encouragement of them as members of the Body of Christ was persistent and heartfelt. Paul’s letters encouraged struggling communities of faith to stay true to Christian ideals, to be rooted and grounded in God’s love, to have faith and hope and know the peace of living God’s way of love, to follow the example of the life and ministry of Jesus, and to be inspired and strengthened by the presence and active promptings of God’s Spirit within and amongst them.

In my reading this week I came across a quote, by an unknown author, that reveals the perspective that, “The first issue Paul takes us to [in Romans 5:1-5] is the gifts we have received from God as we have come to know God through Jesus Christ. We might call these the ‘incarnational’ gifts of God. …They come to us through the work of the Holy Spirit within us. If we make a list of these gifts, the list is impressive.

Grace for our failures

Sharing in the being of God

Knowing the love of God

Having God at work within us”

Let’s hear again, in Paul’s own words, the lesson that he offers to us

on this Trinity Sunday:

“Therefore, since we are justified by faith, we have peace with God through our Lord Jesus Christ, through whom we have obtained access to this grace in which we stand; and we boast in our hope of sharing the glory of God. And not only that, but we also boast in our sufferings, knowing that suffering produces endurance, and endurance produces character, and character produces hope, and hope does not disappoint us, because God’s love has been poured

into our hearts through the Holy Spirit that has been given to us.”

We offer our thanks and praise: to God, whose creative presence is the source and sustainer of life; to Jesus Christ whose life and ministry guide and encourage our way on this journey of faith; and to the Holy Spirit whose inspiration and persistent promptings give energy and enthusiasm to the ministry we share together as people of faith and hope.

May we recognize that we are blessed and may we continue to share our blessings with others, this day and in the days to come.  Amen