Let us pause for a moment in prayer:

welcomed with palms and shouts of praise.

Today we greet him with joy knowing that his

power is compassion. Guide us through this

holy week and awaken within us the stirrings of hope,

that trusting in your faithfulness we may be healed and

transformed, daring to love in your name. Amen

“Imagine we are going to a huge concert hall, packed to the doors with eager and excited music-lovers. We all have our programs in hand, waiting for the thunderous music to begin. We know what it ought to sound like. This will be music for a battle, for a victory, thunder and lightening and explosions of wonderful noise. The concert manager comes on stage and declares in ringing tones that the famous musician has arrived. He gets us all on our feet, to welcome with an ovation the man who is going to fulfill all our expectations.

As we stand there eagerly, a small figure comes on the stage. He doesn’t look at all like what we expected. He is carrying, not a conductor’s baton, to bring the orchestra to life, but a small flute. As we watch, shocked into silence, he plays, gently and softly, a tune quite different to what we had imagined. But, as we listen, we start to hear familiar themes played in a new way. The music is haunting and fragile, winging its way into our imaginations and hopes and transforming them. And, as it reaches its close, the orchestra responds with a new version of the music we had been expecting all along.” (Matthew for Everyone, by Thomas Wright, quoted in Seasons of the Spirit, January 2005)

Our gospel story today recounts “Jesus’ Triumphal Entry into Jerusalem” 2000 years ago. Each of the four gospel writers, Matthew, Mark, Luke, and John record an account of this event. All the accounts are very similar which is not always the case with the gospels.

Today’s reading from Mark says: “Many people spread their cloaks on the road, and others spread leafy branches that they had cut in the fields. Then those who went ahead and those who followed were shouting, ‘Hosanna! Blessed is the one who comes in the name of the Lord! Blessed is the coming kingdom of our ancestor David! Hosanna in the highest heaven!’”

The Jewish people expected the messiah would come from the lineage of their great King David and be a warrior king who would lead them to liberation from the Roman imperial army which oppressed them and took their freedom away. This warrior king would have entered Jerusalem on a horse (a symbol of wealth and power) not on a donkey. That Jesus did not fit their expectations, of the long awaited messiah, is certain and yet the crowd hailed him as such and begged him to save them. (Remember that “Hosanna” literally means “save now” so the crowd was really crying, “save us,” rather than “hooray” or some other acclamation.)

By this point, the people, if they had not already heard Jesus’ stories in person or witnessed his compassionate and justice-seeking actions, would surely have heard many stories from others about his miracles and  healing ministry. They would also have heard stories about the powerful religious elite’s confrontations with Jesus.

It is in this super charged situation of Roman occupation and the people’s desperate hope for a saviour to rescue them that Jesus enters Jerusalem and navigates his way through the crowds on his way to the Temple.

I can imagine that on that day, there would have been crowds of hundreds, perhaps thousands, of pilgrims who had travelled to Jerusalem for the Passover celebrations. Still, I was surprised when I read this week that, “Jerusalem probably had around forty thousand inhabitants in the first century. But for a major festival like Passover, two hundred thousand pilgrims or more would come to the city.” (The Last Week, p.18, by Marcus Borg)

With this in mind, it is not surprising to imagine that there was a huge crowd moving toward the entrance of this city. It was probably hot and dusty with lots of noise and commotion, with so many people trying to move toward the gates of Jerusalem. There would have been a festive atmosphere present as this was a high holy festival and holiday for work-weary peasants whose lives were dedicated to the survival of their families. I also imagine it would have been a bit of a chaotic scene with people trying to keep track of their children and their belongings as they travelled along the crowded pathway. And then, to add to the commotion, there was a sudden stirring of the crowd and excitement as a man appeared from the east in the midst of the crowd riding toward Jerusalem on a donkey.

Jesus began his descent to Jerusalem from the “Mount of Olives, the traditional location from which people expected the final battle for Jerusalem’s liberation would begin.” (Feasting on the Word ,Year B, Volume 2, p.155) But, instead of riding a horse in the manner of a king with military power, Jesus rode a common donkey a symbol of humility and peace. A biblical commentary called, Feasting on the Word, states that a donkey was, “the animal princes rode when they wished to signify peaceful intentions. Jesus, then, is depicted as coming in peace – not coming to conquer but to teach the ways of peace…” (Ibid, p.156)

Riding a donkey also fulfilled the messianic prophecy, from Zechariah that  proclaims, “Rejoice greatly, O daughter Zion! Shout aloud, O daughter Jerusalem! Lo, your king comes to you; triumphant and victorious is he, humble and riding on a donkey, on a colt, the foal of a donkey.” (Zechariah 9:9)

I imagine Jesus’ disciples were riding on the crest of the wave, exhilarated with the enthusiastic welcome of the crowd, never thinking that right around the corner a crisis was brewing and their beloved teacher and companion would fall victim to a devastating arrest, torture and execution.

Just like in the story we imagined a few minutes ago, Jesus was a different kind of leader than what was expected. He modeled an alternative and radical kind of servant-leadership. He worked at the grassroots level, his power was the power of love; of empowering others and honouring the giftedness and value of all people.

Then, as it is now, Jesus’ powerful and life-giving example of love that heals, transforms, reveals injustice and works to bring about the fulfillment of God’s commonwealth, is desperately needed.

Everywhere in our world, life is uncertain. But, most people in the Northern Hemisphere have access to food, clean water and shelter (most, not all) but there is still the uncertainty of how long we, and those we love, will live and whether or not just around the corner we will be faced with the loss of health, loss of a loved one, or any other situation that could radically change the quality of our lives.

Even so, each of us has the choice to embrace life and to move forward with faith and hope despite the uncertainty and challenges of life or   to be immobilized by fear and worry about the future. Each moment, in our lives, is in a sense a threshold time between the old and the new, the past and the future. In this space let us take heart, knowing we are not alone on this journey of life.

Palm Sunday is a threshold event. It is not only the last Sunday in the season of Lent but it also signals the beginning of Holy Week. Palm Sunday represents the celebration of life, with the awareness that adversity, death and despair is right around the corner. Palm Sunday also recognizes that, as Christians, we walk with Christ through joyous celebrations and the dark valleys of the sorrows of our lives. And, Christ assures us of God’s presence and the promise of new life available to all.

Shortly after his entry into Jerusalem, Jesus’ body would be broken but the spirit of love he engendered in everyone he met would not be destroyed. This love, the embodiment of God’s love for the world, would continue to be revealed in word, prayer, sacrament and song, throughout the ages and continues to this day wherever two or three, or thousands, are gathered in his name. 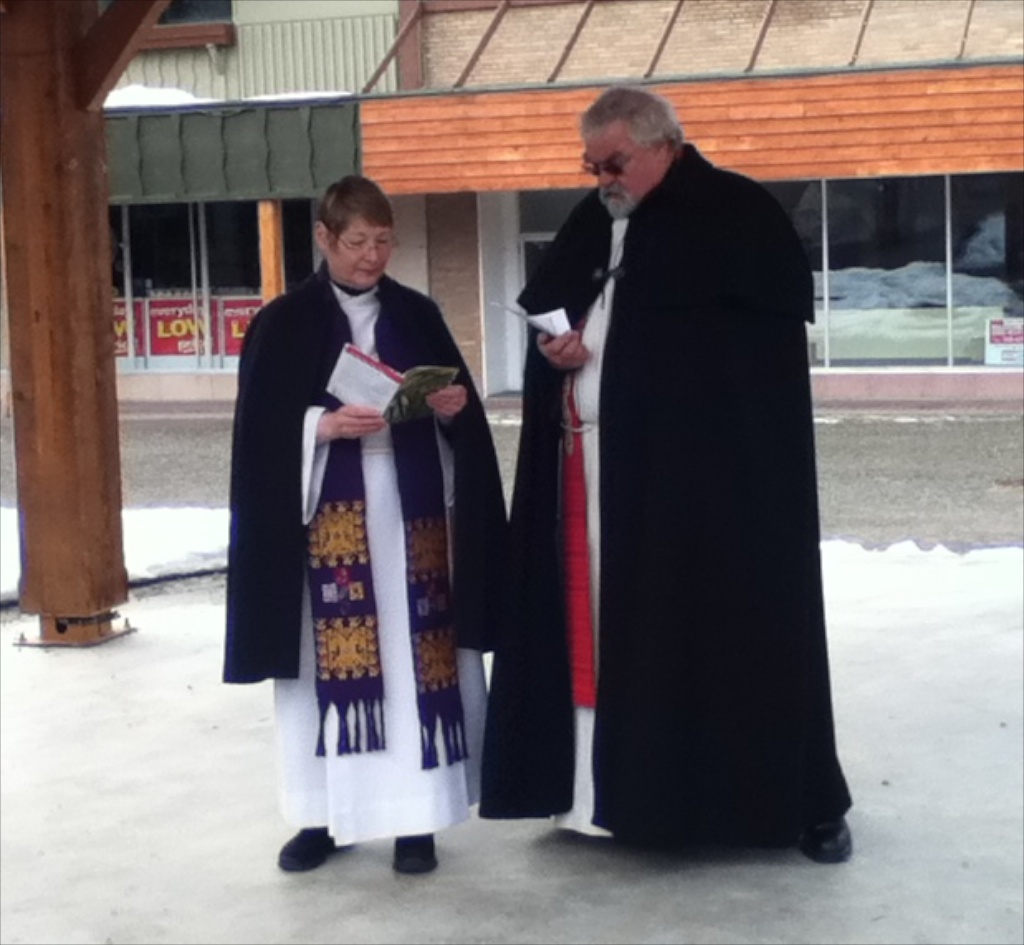